Anger is growing between tourism operators, environmentalists and emergency crews about a crippling amount of red tape they say has hindered firefighting efforts on Fraser Island.

The fire has grown by about 6000 hectares since Monday and has been burning for six weeks, with one witness saying yesterday ash was falling out of the sky “like snow” and the moon was glowing red.

A prepare to leave warning remains in place for Kingfisher Bay Resort and village on Wednesday, although it is believed all guests have already been evacuated.

Queensland Fire and Emergency Services have today mobilised more resources to battle the high fire-risk across Queensland posed by the scorching heatwave.

“A run of hot and dry conditions is exacerbating the bushfire risk to Queensland, and this is likely to continue until the state receives sufficient rain,” QFES Commissioner Greg Leach said.

“We have seen this at K’gari (Fraser Island), where significant firefighting efforts continue despite the challenges firefighters face from the terrain and unfavourable weather.”

The Commissioner warned of the danger of fires starting in the current conditions and reminded Queenslanders to stay vigilant.

“Fires that start under these conditions will be fast-moving and difficult to control,” Mr Leach said.

“Local fire bans have been imposed in multiple areas in the southeast between the Gold Coast and Bundaberg, and in the Whitsundays in North Queensland to reduce the risk of fires starting and spreading.”

QFES was finally able to take over management of the site from Queensland Parks and Wildlife at midday on Friday.

QPWS is responsible for managing World Heritage Areas during a bushfire, with QFES seizing control when a threat to lives or structures emerges.

Asked whether the response by PWS had been adequate, QFES incident controller James Haig said, “I don’t know”, but said they had “dropped an awful lot of water” on the fire since Friday.

The Courier-Mail understands Park Rangers have spoken out about understaffing on the island, while reports have emerged of fire trucks being unable to access the fire due to mismanaged fire trails.

Stakeholders in the area say they are frustrated about a “diabolic” amount of red tape that they say may have hindered efforts to control the blaze.

“It is obscene the amount of red tape that I have to jump through … to be able to just give back to something that needs to be protected,” Hana Robinson of Drop Bear Adventures said.

Yesterday, a group of concerned activists said they’d been forced to take donations from around the world in order to charter a flight over the island to look for injured and endangered animals because the response at a government level was inadequate. 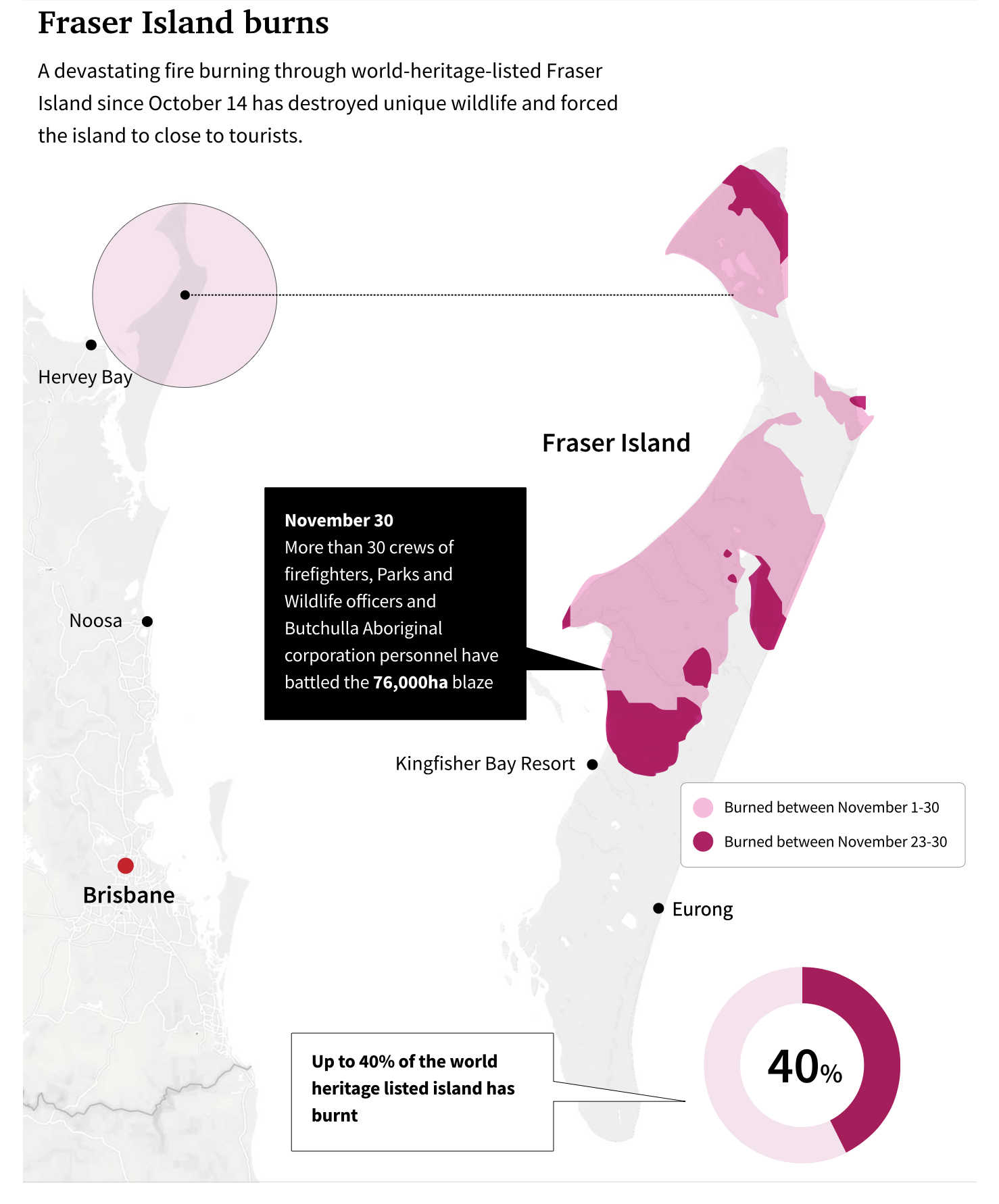 “Previous mitigation measures also involved 13,000ha per year on the island burned – more than the recommended five per cent.”

She said the government allocated $400,000 upgrading tracks on the island, including maintaining fire lines.

But the Opposition said serious questions needed to be answered by multiple government departments.

“It’s an absolute tragedy the fire has ripped through 72,000 hectares of land, with 40 per cent of it wiped out in just six weeks,” LNP fire and emergency spokesman Dale Last said.

The situation has sparked calls for an inquiry into the management of the area.

“There is some discussion about Parks and Wildlife not putting the fire out when they had the chance – they tried to hazard reduction burn but it got away after jumping the track,” a senior firefighting source said.

More than 50 per cent of the island has now been scorched – which equates to more than 82,000 hectares.

A Department of Environment and Science spokesman said QPWS responded “immediately” to the fire but the ability to use waterbombing and the effectiveness of the response was dictated by weather conditions.

“Early attempts to conduct backburns within days after the fire began proved difficult and unsuccessful due to strong dry northerly weather conditions and the highly flammable vegetation types.”

The spokesman said that for most of the period the fire had been burning it was “in remote and inaccessible parts of the island” and noted they collaborated with “other stakeholders on fire management across the island”. 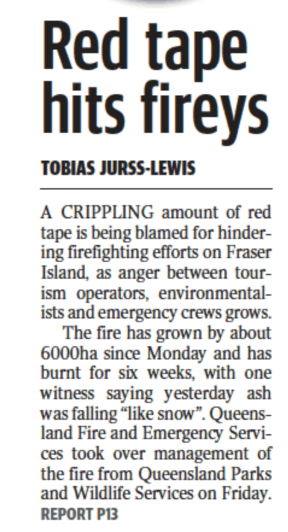 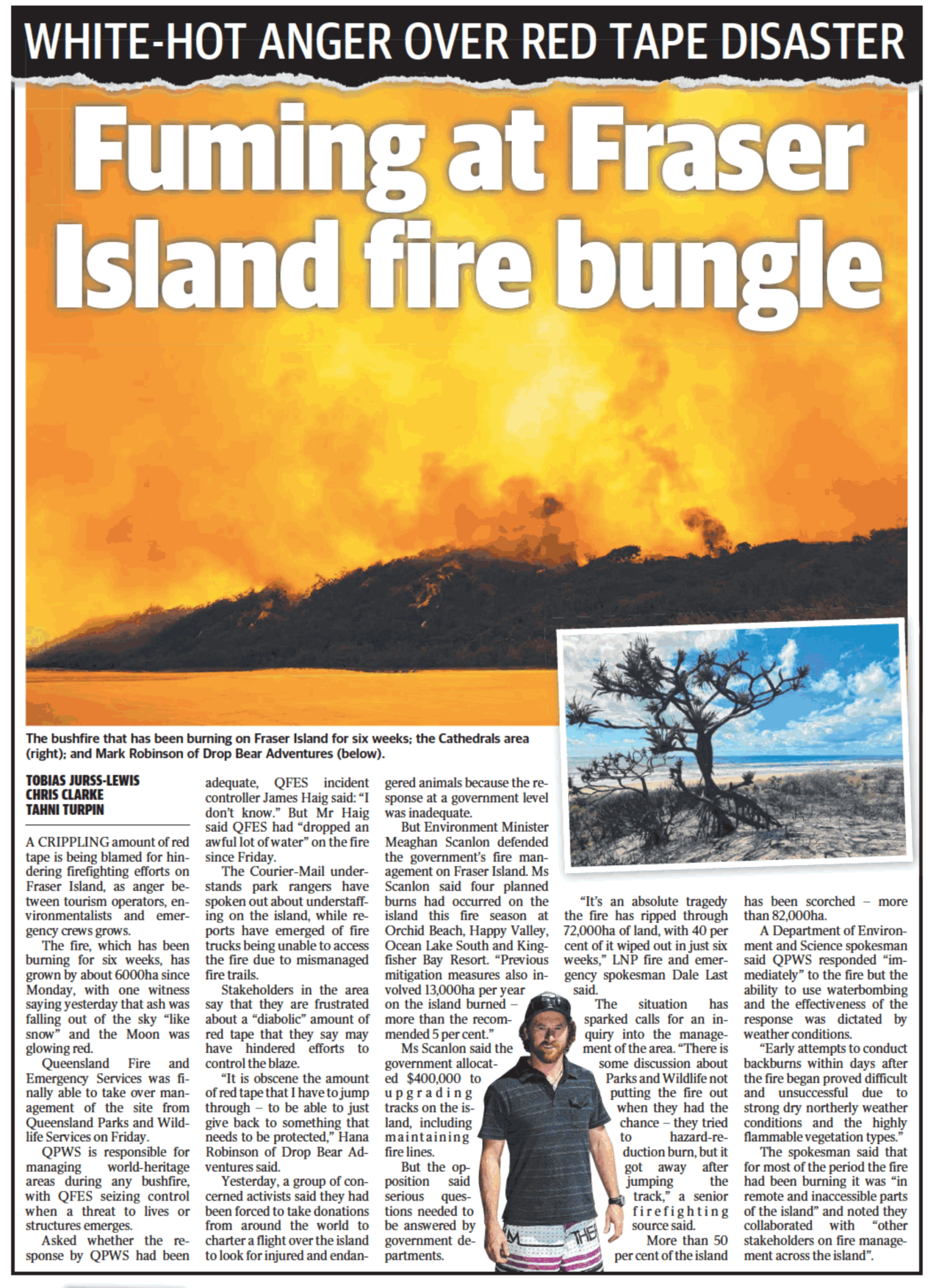