Article by Cameron Stewart courtesy of the Australian.

On a perfect blue-sky day in Washington, Scott Morrison told the 300 people mingling on the lawns of the home of Australian ambassador Joe Hockey that they were just having “a barbecue and a few drinks among friends”.

Well, sort of. It’s hardly an ordinary beers-and-snags affair when your barbecue mates include Donald Trump’s chief of staff, Mick Mulvaney, and the President’s top trade envoy, Robert Lighthizer, among a bevy of Washington powerbrokers. 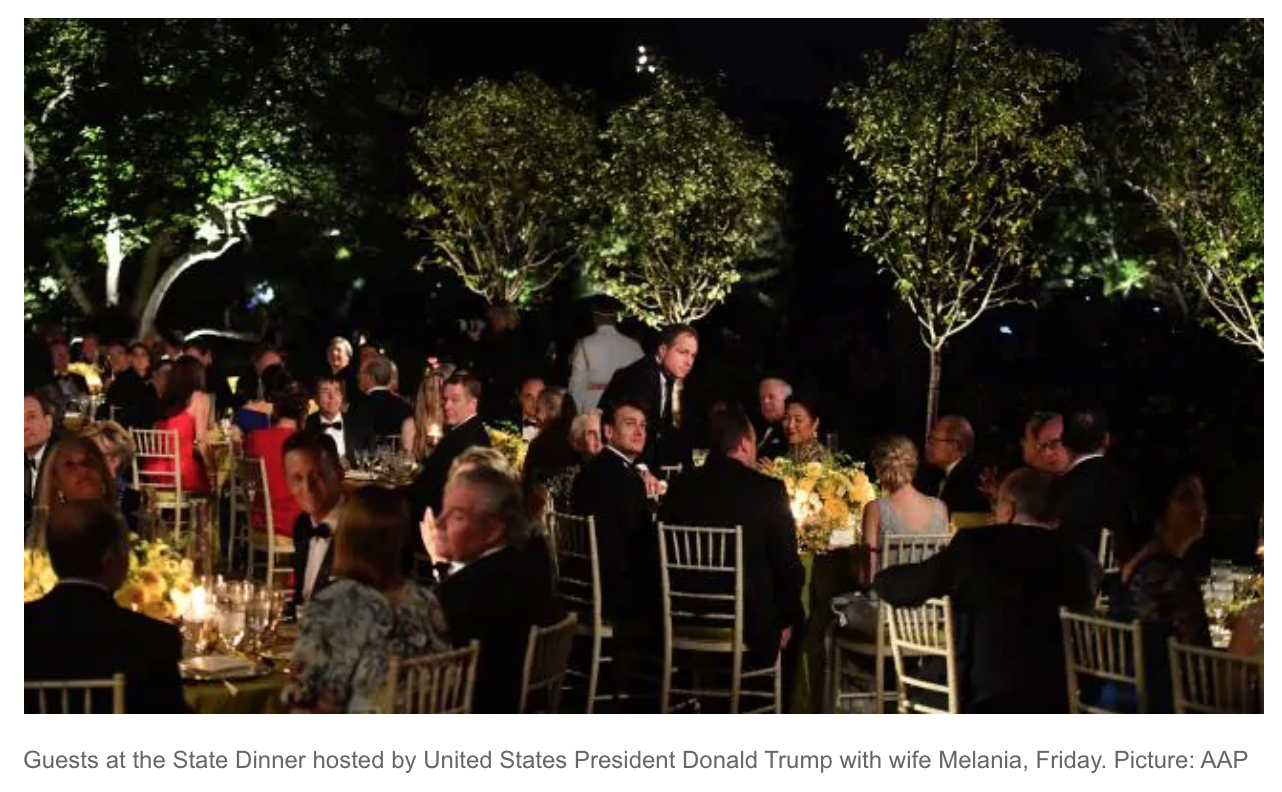 But that’s the way it was with the Prime Minister’s visit to Washington. At every turn, the boy from the Shire was greeted with such pomp, ceremony and top-shelf attention from the President that the hard-nosed White House press corp started asking “what’s all this about?”.

Even Mr Morrison seemed in shock about the stunning state dinner hosted by the President, where a line of trumpeters appeared on the roof of the White House to play Waltzing Matilda to cap off a historic dinner of A-list powerbrokers from both nations. Unbeknown to the Prime Minister, the White House had to call in experts to ask if the roof could take the weight of the band but the President and first lady Melania Trump wanted it to happen — and it did.

“It was the most magnificent, spellbinding, magical night crafted out of the imagination of Mrs Trump,” Mr Morrison told the garden party guests, who included billionaires Anthony Pratt, Andrew Forrest and Kerry Stokes. He spoke of how the President had surprised him when, while giving the dinner toast, he read a poem written by Mr Morrison’s great-great aunt, Mary Gilmore, whose words are printed on Australia’s $10 note. 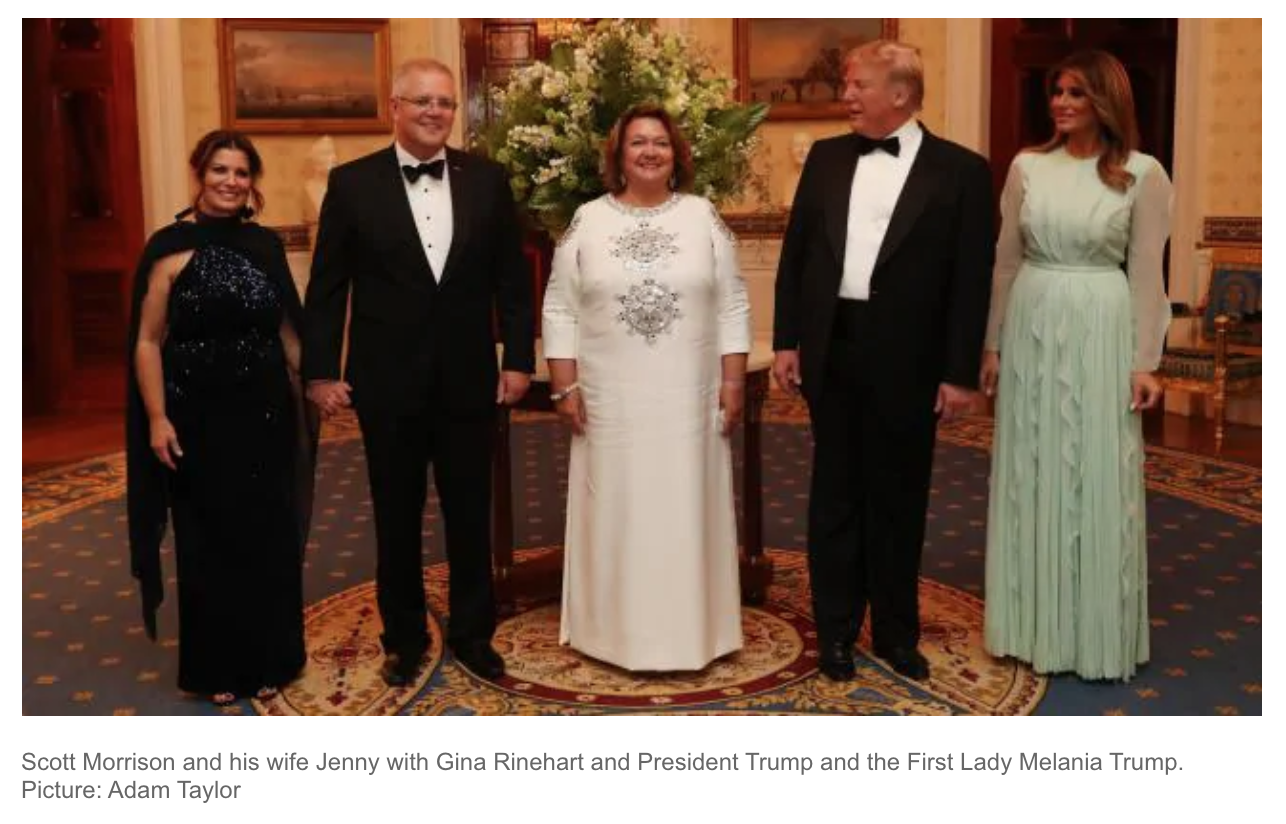 “I heard the start of the poem and I said, ‘that’s Aunt Mary’s poem!’ I’ll have to tell him that when he’s finished,” Mr Morrison laughed. “And he ended up telling me so you know that’s the sort of detail that shows an affection, it just shows a closeness.”

If the Prime Minister was moved by the President talking about Aunt Mary he struggled to hold it together when the trumpeters rose up on the roof to play Waltzing Matilda.

“I was already a bit weepy after that (the mention of Aunt Mary). And then when Waltzing Matilda played, that was just something … I was overcome by it,” he said. 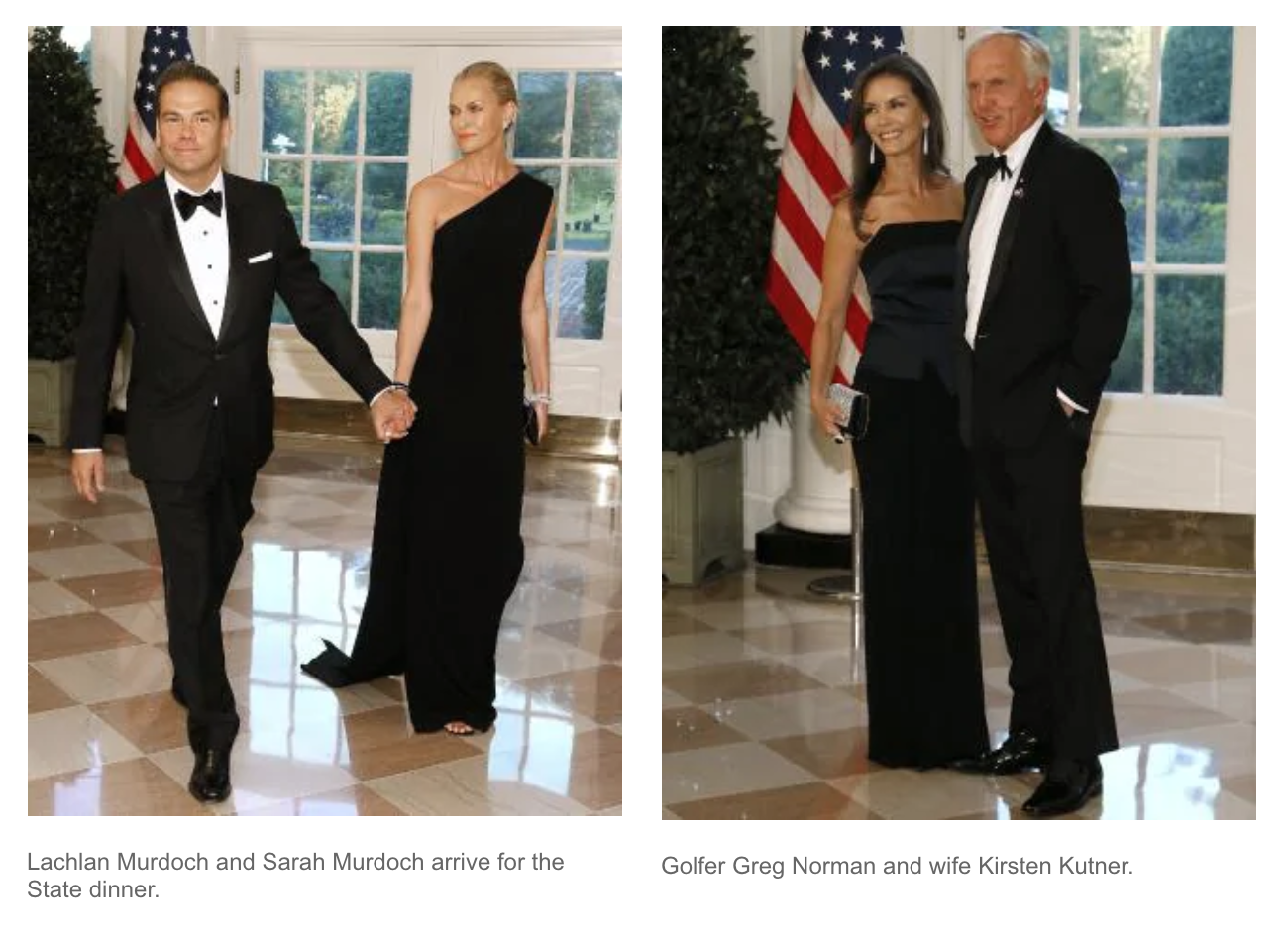 Mr Trump’s state dinner for the Prime Minister — only the second of his presidency — was the hottest ticket in Washington, a chance for guests to mingle with the President, his cabinet and senior powerbrokers and business chiefs from both nations.

When two prominent invitees were forced to cancel at short ­notice two foreign ambassadors tried to switch name tags on the table so they could be closer to the head table.

Henry Kissinger told Mr Mulvaney it was one of the best functions he had ever attended, which is not a small claim for the 96-year-old former secretary of state.

Golfer-businessman Greg Norman said simply that it was the best official dinner he had been to, an assessment that came after he was given the plum seat next to Mrs Trump and Mr Trump. At the end of the President’s table was cardboard king Anthony Pratt, whose new paper recycling plant in Ohio will be inspected on Sunday (Monday AEST) by both the President and the Prime Minister. 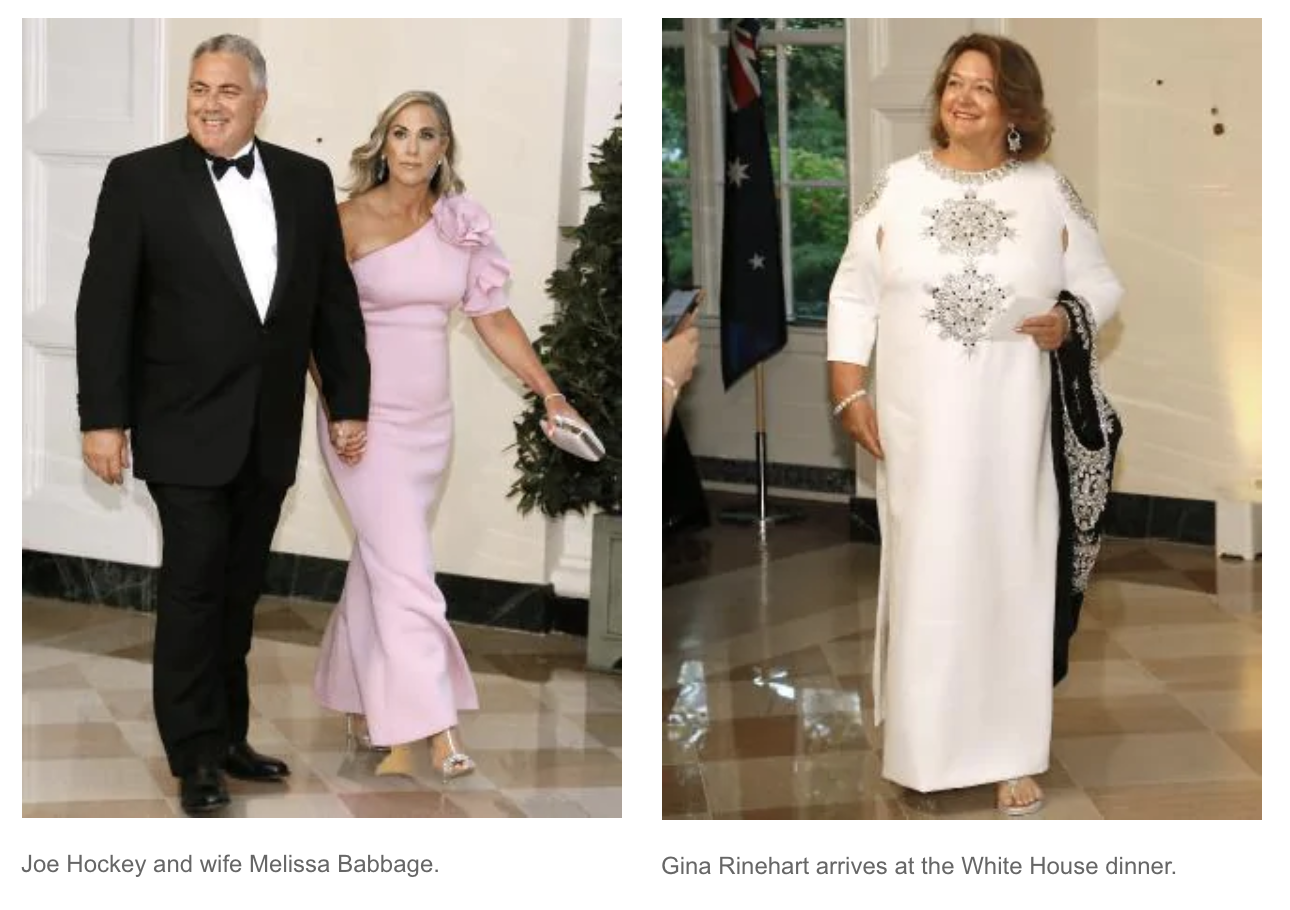 At the garden party and after a blizzard of meetings with the President, his cabinet, military and intelligence chiefs, a tired Mr Morrison smiled as he reflected on the current state of the Australia-US alliance. “Politics can be a really rough business,” Mr Morrison said. “But the elegance of politics — I think the highest form of politics — is when you’re able to speak very clearly about the things you believe in and in this visit with the President I’ve been saying the same things.

“Our belief in free markets, our belief in the power of the individual, our belief in peace and in liberty, the rule of law, you know, the things that have made the world the safe place that it is.”

Despite the puzzlement of some in the White House press corps, Mr Trump had a reason to make such a fuss over the visiting Prime Minister.

Firstly, he admires the way that Mr Morrison defied the polls and the pundits by winning an election in the same way as Mr Trump did in 2016.

Secondly, by embracing Mr Morrison in such an ostentatious way, the President is sending a message to China that there is a formidable alliance building against Beijing’s attempts at strategic and economic hegemony in the region.

Thirdly, by choosing to visit Mr Pratt’s new plant in rural Ohio, Mr Trump is sending a message about job growth and hope to his own midwest voters while also giving a very public vote of confidence in economic and investment ties between Australia and the US.

At the garden party, after emerging from all his meetings without a single serious bilateral issue in the relationship, the Prime Minister was understandably chuffed.

As he departed Washington for Chicago and New York, the Prime Minister could hardly complain about the welcome he was given in the US capital. It was far more than “a barbecue and a few drinks among friends”.