Mrs Rinehart is the founder and patron of National Agriculture & Related Industries Day and her Hancock Prospecting and S. Kidman & Co sponsored the mini-festival.

No expense was spared to turn the Bjelke-Petersen family’s paddocks into the perfect venue to celebrate Australia’s most important industry (or perhaps, the second most important …)

A large stage, with lighting and a crystal clear sound system was accompanied by a pair of large screens which highlighted what was happening on stage and showed videos to punctuate Mrs Hancock’s speech.

Videographers moved around the crowd to livestream the evening and capture film for a special which is scheduled to be shown on the Nine Network.
The evening began with a choir from the Kingaroy State High School singing the National Anthem.

After a few warm-up songs by Dean Perrett, Mrs Rinehart then took to the stage (see below)

Speaking on Monday, host John Bjelke-Petersen said he believed everyone had enjoyed themselves, the weather was perfect and “we raised some money (for charity Rural Aid) which was the major thing”.

He said he would be happy to host the event again, but that would be up to the National Agriculture & Related Industries Day committee and Rural Aid.

Edited Highlights Of Mrs Rinehart’s Speech:
“For me it’s a very special honour to be returning to Sir Joh, Lady Flo’s and family’s much loved ‘Bethany’,’” Mrs Rinehart told the audience of about 200.

“As John (Bjelke-Petersen) and his family know, my first visit here was with my dad, more than 40 years ago! Wonderful memory and I’ve had many wonderful visits since …”

Mrs Rinehart said agriculture was “the very best of Australian culture: hard work, mateship, striving through adversity, not relying on handouts, common sense (a rare things these days), practical, sensible, giving helping hands, trustworthy, responsible, striving to do the tasks at hand well, investors in our country, job providers, risk takers, and a larger pro rata percentage of who make up our defence forces and Olympic teams.”

“Outside of mining, what other industries have done as much for our country or for as long as our agriculture and its related industries has done?” she asked.

“It is up to us to ensure that other Australians, especially those in the cities, better understand the importance of our industry and the industries that rely upon our industry. ”

She said agriculture needed to be “internationally cost-competitive” so it could retain its export markets.

“For our agricultural industry to continue to be a success, we must encourage our governments to lessen the huge costs they burden us with by government tape and taxation,” she said.

“Please keep speaking up for your industry.”

This was greeted by applause from the audience.

“Those of you who were with us last year in Perth, heard the then Federal Agriculture Minister … telling us that agriculture would be heading to a $100 billion industry by 2030.

“Well, Canberra is still saying this, but are they undertaking the government tape cuts to allow this to be achieved?”

She said Institute of Public Affairs (IPA) executive director John Roskam had pointed out that government regulations had grown 80-fold in the past 50 years, while agriculture had only doubled.

“Very telling, isn’t it?” she said, “As those on the land battling with government tape know, while also battling with feral animals, fires, droughts and more, government tape restricts us extensively. Things like our ability to keep our stock safe from feral animals and poisonous snakes, restricting even our ability to make our families, staff, infrastructure safe from fires, limiting our firebreaks, even fining us and or jail terms if we breach.

“These are areas of government regulation I especially hate, and make the blood of many good farmers boil. Plus restricting us from getting water for our stock.

“My goodness, haven’t our governments learnt anything from the fact most of us have been suffering from severe drought for four years? Many from fires too, and we need to invest in more water to support our stock and grains, let alone increase our produce, and to help protect us against fires.

“We all know Asia is the largest growing market for Australia, and often hear that Asian demand for agriculture products is projected to show sustained growth towards the year 2050, providing opportunities for Australian exporters of high-quality, clean, agricultural products.

“But what isn’t so clearly said, is that we mustn’t lose this opportunity due to our government holding us back through endless red, green and other tape that isn’t levied on our international competitors, and which drives up the cost of our production and our products.

“Obviously, the list of government tape restricting our industry is much much longer, but let’s contrast this with when Joh Bjelke-Petersen was Premier.
“Sir Joh was a man of integrity, who loved his Kingaroy and Queensland. What he did for Queensland and the rural industries in this great state was remarkable.

“He built dams, he encouraged businesses and investment, he got things done. Agriculture prospered, Queensland prospered.”

A National Party campaign ad from the 1980 State election campaign was shown on the big screens – again to a round of applause.

“So much so, that when Joh Bjelke-Peterson became Premier, he inherited debt, then, with businesses growing under his leadership, when he left office, he left money in kitty … Sir Joh knew difficult decisions had to be faced, not run away from.

“Today, all our major parties seem to know is spend the taxpayers’ money, both major parties trying to buy votes with that money, more the better, rather than taking the tough decisions to curtail their government burden and tape. The government party goes on and on!

“Spend and more spend, irrespective of what they are doing to our record debt, and the huge burden their overspending is leaving for the youngsters in our industry and the next generations.

“But Sir Joh knew as a successful farmer and contractor, not to tie up agriculture and other businesses in excessive government tape, and he cut taxes, too.

“Sir Joh led the way and showed us that this works. Those in government may not recall, but I do. And I hope you always remember your outstanding Kingaroy farmer, and Premier, and his record and spread these very important lessons far and wide.

“Now, I reckon Sir Joh would be rather pleased that we’re here tonight, celebrating rural industries and our national day, with some of the proceeds going to Rural Aid. What do you think?”

Mrs Rinehart then launched the “Change For Agriculture Initiative” and a website, www.changeforagriculture.com.au, which she urged her listeners to visit and list their issues.

“So tonight, I think we should create some real change,” she said.

“I have decided to do something special for this year’s Agriculture Day and I would like your help. I want to hear from each of you how government tape and taxes have affected your lives and your properties.

“What changes you think the government should make that would be positive for our industry, and give substance to their policy that by 2030 Australia will be increasing the value of its agriculture to $100 billion.”

She said the answers submitted to the website over the next three weeks would be collated into a submission paper that would be presented to government.

Footnote: The 2020 Australian Financial Review’s Rich List had Mrs Rinehart in top spot, with an estimated net worth of $28.89 billion. 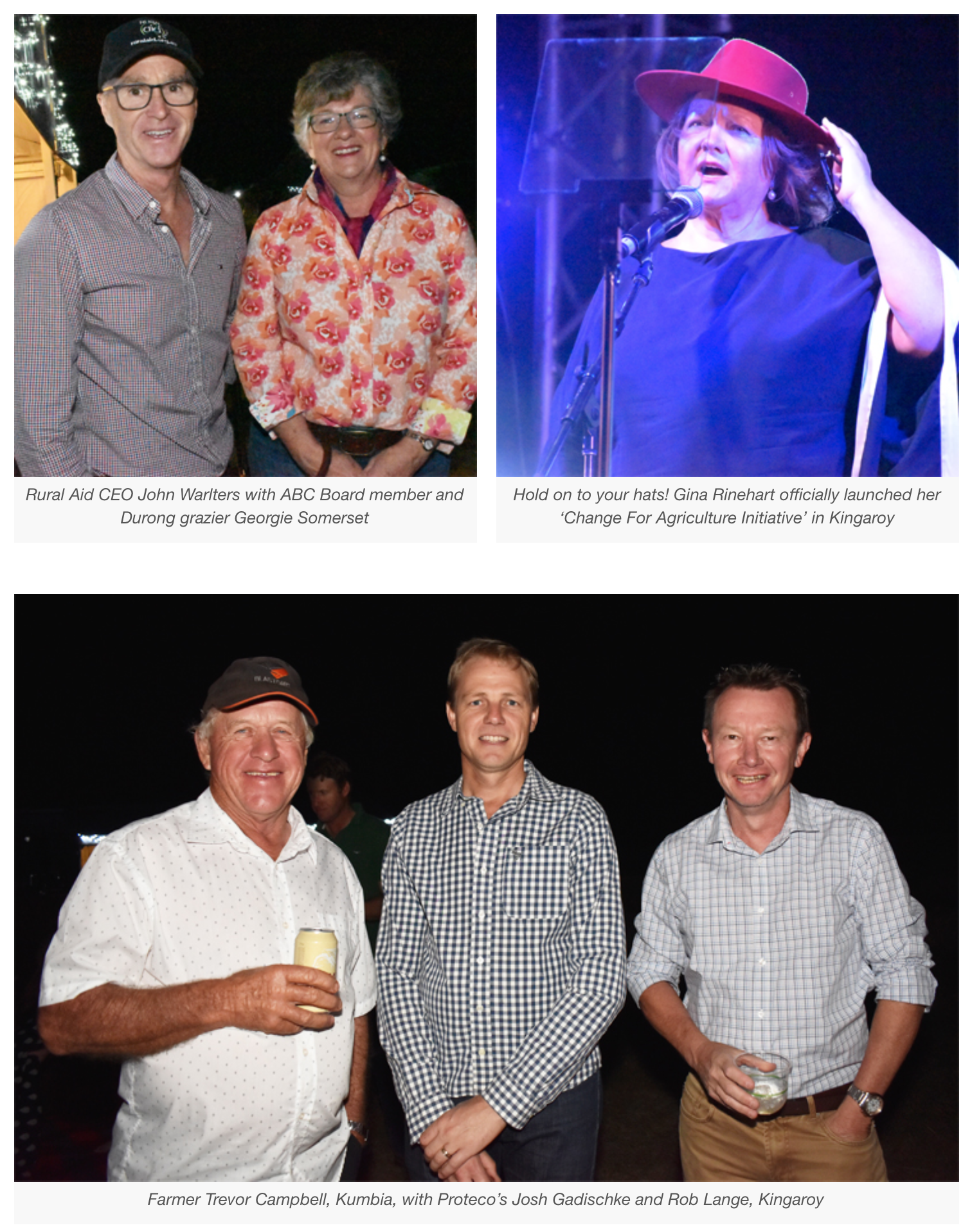 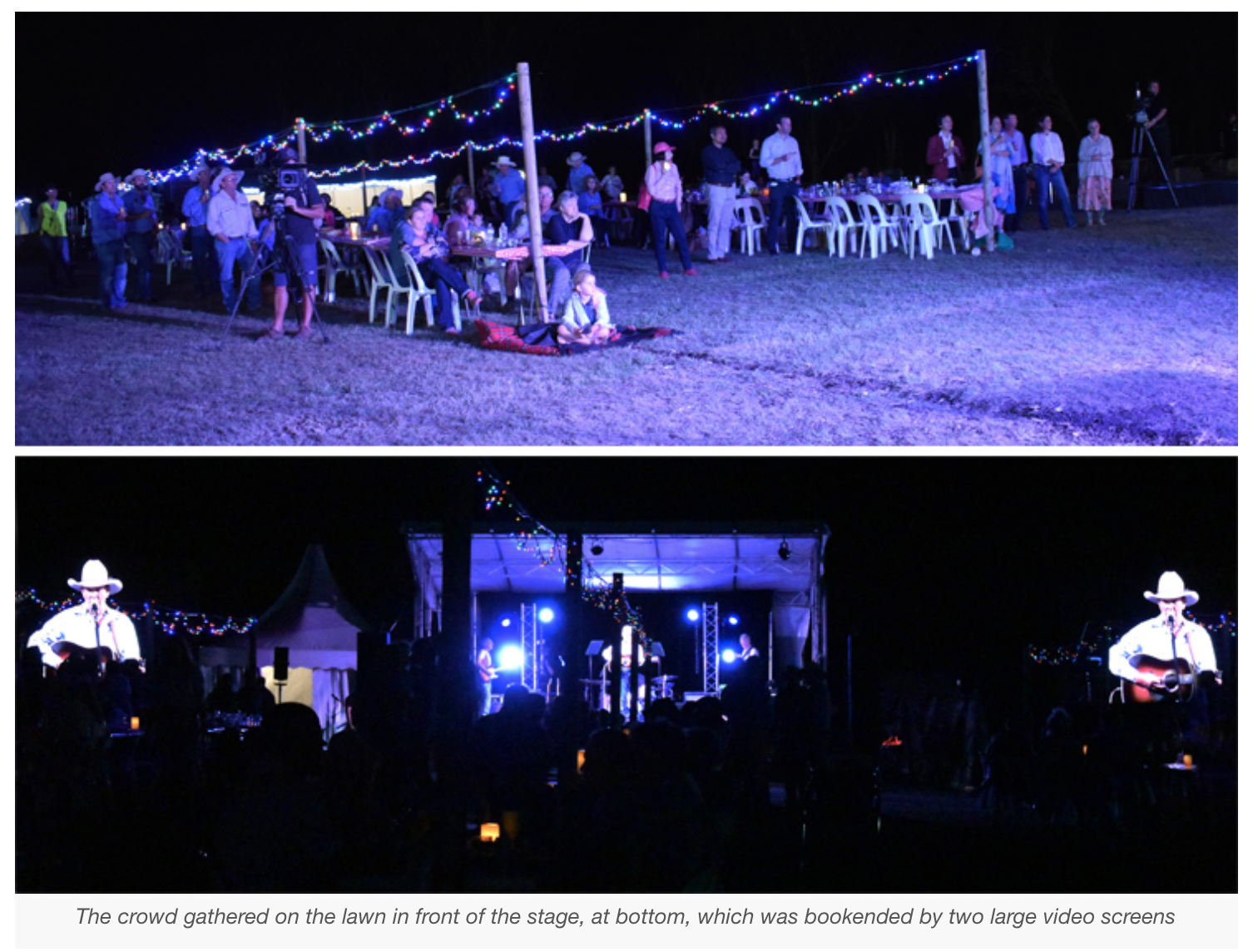