Editorial courtesy of the Australian.

The International Monetary Fund’s April World Economic Outlook leaves no doubt that, whether it wants it or not, economic management will be the defining issue for the Albanese government. Behind the pomp and ceremony of federal parliament’s first day on Tuesday, and the prime ministerial rhetoric of a big agenda on climate and social issues, is the reality of a world grappling with high inflation and slowing growth. Russia’s war in Ukraine has sparked an energy price shock that is reverberating through the global economy and will quickly translate into lower production and food shortages for the world’s poor. The IMF says the world economy is facing an increasingly gloomy and uncertain outlook.

Growth in the three largest economies is stalling but the IMF says fighting inflation must continue to be the first priority for policymakers. This means higher interest rates and discipline by government in managing demands for higher wages to offset rising costs. This is the message Jim Chalmers must emphasise when he delivers his economic statement to parliament on Thursday. With a projected trillion-dollar debt and interest rates rising, the nation’s finances are vastly different to what they were when the current budget was framed. At that time, the argument was that the size of the debt did not matter provided nominal economic growth exceeded the national interest rate. This was because economic growth would more than cover the cost of servicing debt interest payments. If it was ever true, this is certainly no longer the case.

Too much early attention has been placed on how the federal government will proceed to legislate its target to cut carbon dioxide emissions by 43 per cent from 2005 levels by 2050. Already, there is a familiar pattern to the talks. Labor has set a position that is more ambitious than the Coalition but not high enough for the Greens. The Greens have agreed to enter discussions with the government but have set an unreasonable position for Labor to stop future coal and gas developments. The Coalition is rightly wary of indulging Labor in its higher target without knowing what the cost of implementing it will be. The only certainty is that Labor will be forced to deal with the Greens on its fossil fuel demands as part of negotiations for a strengthened target or to pass its budget through the Senate, where the Greens hold the balance of power. The Coalition has every right to stand its ground. Labor does not need to legislate a climate target and must be prepared to stare down the Greens.

But rather than the stage-managed theatrics of parliament, it is most often the unexpected crisis that shapes the fortunes of government and tests the mettle of leaders. Scott Morrison’s tenure as prime minister was defined by the pandemic that wrecked plans for budget repair and saw political authority leak from the federal government to partisan state leaders. John Howard had the 9/11 attacks on New York and Washington, global terror and the Afghanistan and Iraq wars. Anthony Albanese has the energy price shock of the war in Ukraine and an outbreak of foot-and-mouth disease to our north in Indonesia that is out of control in one of the nation’s favourite tourism destinations, Bali.

If foot-and-mouth makes its way to Australia it will devastate our grazing industry, immediately cut exports and send prices soaring for all consumers. The cost of an outbreak has been estimated at $80bn across 10 years. Gina Rinehart, as towering a figure in agriculture as she is in iron ore, says an outbreak would put more than 65 per cent of the nation’s export markets at risk. Like the rest of the industry, Ms Rinehart is calling on the government to overreact rather than be faced with the regret of having been too slow should the worst happen. Hancock Agriculture and Kidman Australia chief executive John McKillop says we must take the fight to Indonesia and other countries experiencing an outbreak. But he says we must be clear with them that if they cannot contain the disease Australia will be forced to restrict travellers from those countries. Any decision to close borders would be fraught. It would risk upsetting diplomatic ties with neighbours and likely have ramifications for trade. Liberal leader Peter Dutton says the risk is too great not to act.

Politically, we can expect to see the Prime Minister held to the same, often unreasonable, high standard on dealing with foot-and-mouth as Mr Morrison was held to by Labor on the pandemic. This is as it should be. Mr Albanese must prove his government to be as successful at keeping foot-and-mouth out of Australia as Mr Morrison was in dealing with Covid-19. The signs are that the government understands the high stakes at play but it has yet to match its tough words with action. Establishing strict screening and decontamination arrangements at airports has been too slow. Mr Albanese must be in no doubt that, as leader, he is the one who will be held to account should things go wrong. The same is true for the economy. 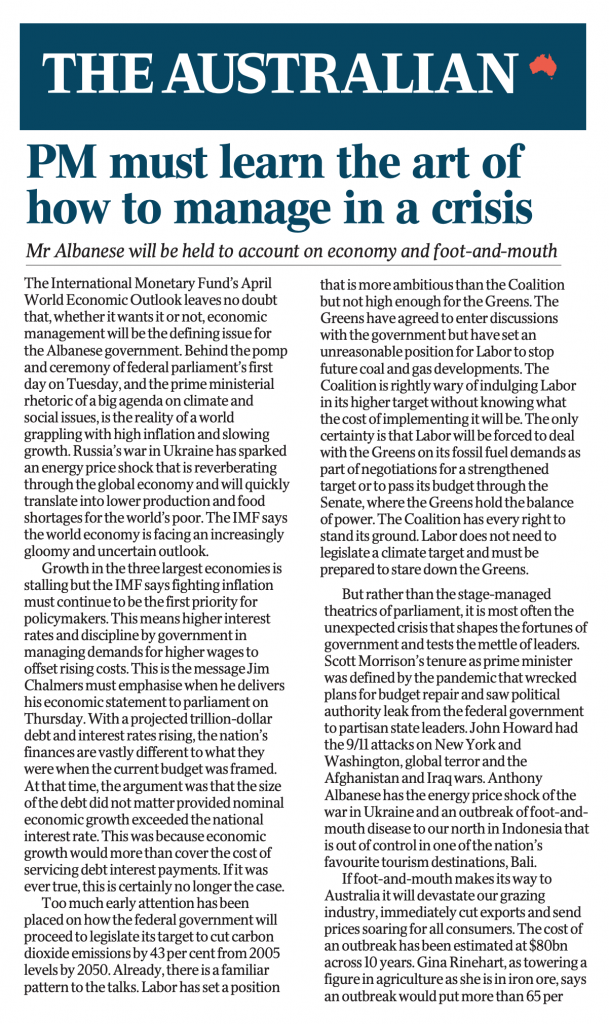