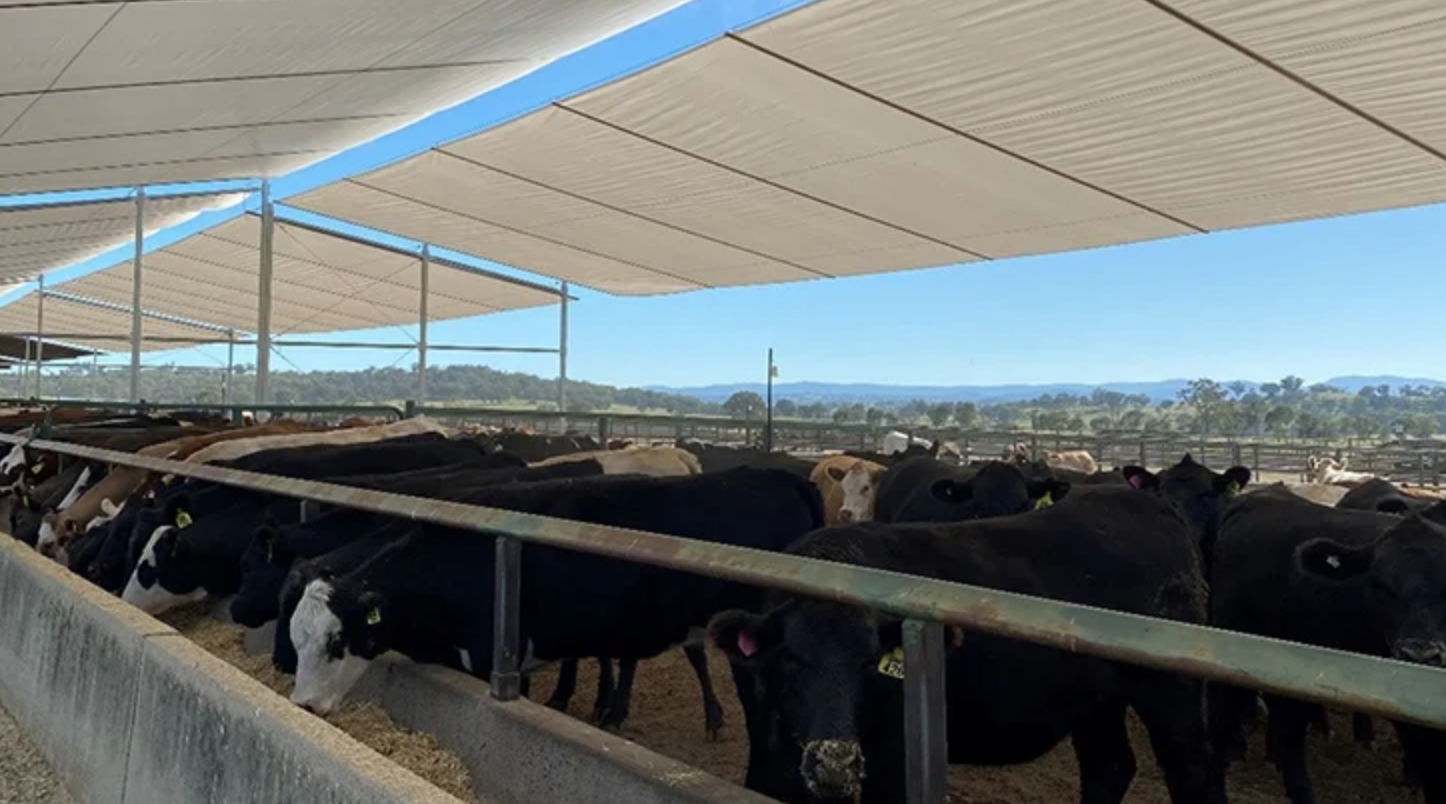 Quantifying the animal welfare and production benefits of shade structures in southern feedlots is the focus of a new research project this summer, funded by Meat & Livestock Australia (MLA).

The research project is being undertaken by the University of New England at its Tullimba feedlot research facility, led by Dr Angela Lees and Dr Peter McGilchrist.

Testing two-tiered shade
Researchers are investigating the impacts of two different types of shade on feedlot cattle, compared to no shade, and will follow the cattle through to slaughter.

One part of the feedlot will have a shade structure installed in a two-tiered design, comprising 290/300 GSM knitted monofilament polyethylene 80% UV solar block shade.

Another part of the feedlot will have a shade structure installed in a similar two-tiered design, comprising a translucent waterproof 340 GSM high UV polyethylene.

The two-tiered shade and shelter systems, designed and supplied by Architex Fabric Structures, a subsidiary of Polytex, will feature a large vented apex to allow air flow through the structures. The north-south orientation combined with the waterproof shade reducing rainfall into the pens will help in the management of pen surface conditions.

Project leader, Dr Angela Lees, who has been involved in previous shade and shelter research projects in Queensland, said while Tullimba is in the temperate New England climate, they anticipate cattle will seek shade and experience production benefits similar to northern shade trials.

“Most people would consider the New England summer to be relatively mild, but we’ve seen cattle here in the December to March period expressing heat stress behaviours,” Dr Lees said.

“The high elevation of the New England region means there is a trade-off between ‘cooler’ summer conditions and solar load.

“Some of our colleagues in the United States have defined that in locations such as Nebraska, there seems to be solar load effect, meaning that feedlots in higher locations tend to experience heat stress at a lower threshold.
“We’re confident we’ll see the welfare and production benefits from these shade structures, similar to northern trials, but we need the data to quantify it.”

“The first cohort of cattle went into the feedlot in December, while the second cohort entered in mid-January,” Dr Lees said.

“We will follow them to slaughter and get a Meat Standards Australia (MSA) grade on them so we can see the carcase characteristics.

“We’re also collecting the adrenal glands as an indicator of chronic stress.
“The project will really help quantify the impacts of shade from a science perspective while still giving a real-world outcome for the Australian feedlot industry.”

Another cohort of cattle will enter the feedlot in winter 2021, to quantify the benefits of the waterproof shade structures as a shelter during winter conditions.

“Keeping cattle and pens dry in winter by preventing rainfall from impacting the pen could also reduce the amount of energy each animal uses to stay warm, therefore allowing more energy for growth,” Dr Lees said.